Looking for longer-term forecasts on the US Dollar? Check out the DailyFX Trading Guides.

The Euro enters Q4’19 on unstable ground versus many of the major currencies. Midway through Q3’19, fresh yearly lows were reached by the Euro against the Japanese Yen and US Dollar, thanks in part to speculation around European Central Bank monetary policy, swirling concerns around the US-China trade war, and uncertainty over the shape of Brexit. Until these fundamental themes lose their grips on markets, it’s unlikely that the technical outlook for the Euro changes materially over the coming months. 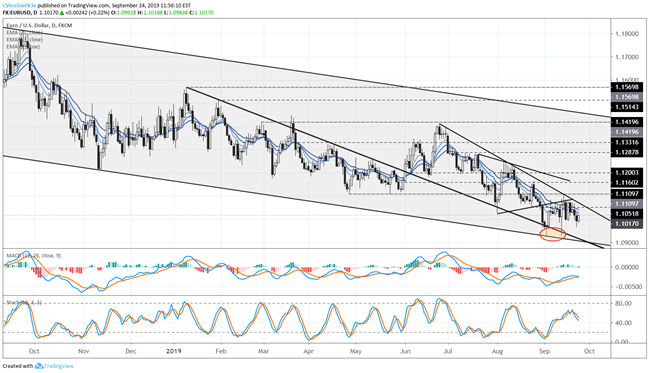 EURUSD rates have been able to maintain elevation after finding channel support dating back to the August and November 2018 lows as well as the descending trendline from the January and April 2019 swing highs. In the post-September ECB meeting world, a new range has been carved out between the yearly low at 1.0926 (for reference, the September ECB meeting low was 1.0927) and 1.1110, the late-April and late-May 2019 swing lows. The measured run on a bullish reversal attempt higher would be 1.1294. Conversely, a bearish breakout below 1.0926 would see a measured move of 1.0742.

View our long-term forecasts with the DailyFX Trading Guides